We are interested in using languages of the ML family to build software manipulating higher order symbolic expressions, mostly theorem provers such as Coq. While ML was designed with this use case in mind it provides little support for the most tricky aspects of symbolic expressions: binders and unification variables. Their interplay makes core algorithms such as type inference hard to master and more in general the components built on top of them buggy and unsatisfactory from the user’s point of view. Letting users fix or extend these parts of the system by writing ML code proved to be difficult, at best.

We propose to follow a different approach that proved to be successful for other kinds of applications, like text editors and video games: adopt an high level, easy to use, extension language.

ELPI is a programming language that features native support for both binders and unification variables. It extends the Higher Order Abstract Syntax approach by letting one reuse the binders and the unification variables of the programming language in order to implement the ones of the object language. More precisely ELPI is a variant of λProlog enriched with modes, constraints and constraint handling rules.

In this talk we introduce the ELPI programming language and its implementation. As a running example we link ELPI to a toy interpreter for an ML like language and we implement the W algorithm in ELPI. 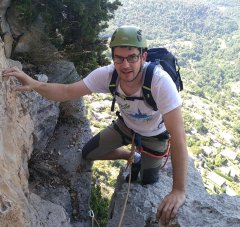